A Wrecking Ball Moment: How Bukele’s Personal Power Grab Is Evidence of a Dangerous Ignorance of History

The front page of last Sunday’s papers in El Salvador had different versions of the same jarring scene that president Nayib Bukele had staged for the media. The photos of the event showed the millennial head of state surrounded by heavily armed soldiers, his casual attire in sharp contrast with the bulletproof vests and automatic guns of the men around him. They were conspicuously out of place, presiding over the room where the national legislature meets, the “Salón Azul.” And yet something was missing. The operatic moment was marred by the absence of the majority of congress members. The carefully conceived staging was, therefore, missing the key ingredient of cowed deputies surrendering to the power of Nayib. Their absence blocked the president from achieving his goal of forcing the legislature to approve a loan to finance his anti-gang signature plan.

It was ironic for a president so notoriously unmoored in history to be the protagonist of a tableau vivant which, unwittingly, elicited profound historical resonance.

Bukele sees himself as the permanent replacement of the two political parties—the rightwing Nationalist Republican Alliance, or ARENA; and the leftwing Farabundo Martí National Liberation Front, or FMLN—that have dominated Salvadoran politics for the past three decades. To Bukele and his supporters, his election marked the end of the post-civil war era. His government downplays the commemoration of the signing of the Peace Accords that marked the end of El Salvador’s painful war. He is bringing to power a new generation, and signals the change by eschewing a tie, wearing garishly colored socks, and by his savvy social media presence. In a moment of maximum international exposure, during his speech at the United Nations, he took a selfie. His most celebrated tweet describing himself as “The coolest and handsomest president in the entire world” was characteristically narcissistic and non-ideological. 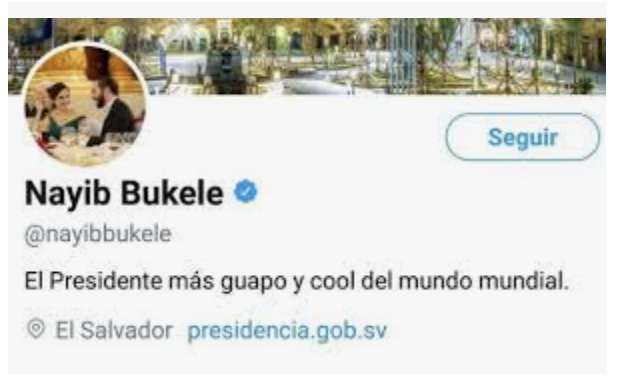 Given his norm-breaking behavior, governing-by-tweet politics, disparaging of the press, ignorance of the importance of checks and balances, cavalier attitude to the rule of law, self-aggrandizement, interest in TV ratings, and tendency to demean opponents, outsiders see in president Bukele a follower of examples set further south in Brazil or, perhaps, north of Mexico. Someone I know refers to him as “nano Trump”.

Bukele pays little attention to history. Having done a somersault over the post-war period, he now hopes to move on and consolidate his power. But the army that is cooperating with him cannot forget the past. An ongoing trial has forced military officers to acknowledge their role in the horrific massacre of El Mozote, the sanguinary episode of the civil war when almost a thousand innocent civilians were slaughtered by the army’s elite unit, the Atlacatl Battalion. Military officers are also profoundly interested in reviving the amnesty law that protected them from prosecution for crimes against humanity before it was declared unconstitutional by the Supreme Court.

Meanwhile, the young president mimics the norm-busting ways of twenty first century role models such as Trump and Bolsonaro. But it takes a profound ignorance of Salvadoran history to repeat its worst mistakes with such casualness. Bukele’s actions on February 9 repeated the twentieth century Salvadoran tactic of powerful civilians seeking alliances with the armed forces to achieve their goals. For most of the past century, an alliance between the Salvadoran Army and powerful civilians controlled the legislature, rigged elections, enjoyed a complicit press, and violently repressed any political participation outside the narrow boundaries imposed from above.

It’s worth remembering here the historical origins of the modern civilian-military alliance in El Salvador. In January 22, 1932, when confronted with a peasant revolt, the upper classes empowered general Maximiliano Hernández Martínez to deal with the situation. Side by side, members of the army and civilians (individuals that “had their own interests to defend,” according to the official request for volunteers), counterattacked. It was one of the most horrific instances of state-sponsored violence in Latin American history. In a couple of weeks, the military-civilian cooperation repressed the uprising. By the end of January, all that was left to do was to “clean mountains and roads, many of which are still infected with rebels,” as a newspaper said at the time. More than 10,000 peasants were killed by the government forces, perhaps more. The members of the Casino Salvadoreño, the private club of the oligarchs, collected money and sent it personally to General Hernández Martínez to pay for the expenses of the “emergency”.

General Hernández remained in power for twelve years by fixing elections, ordering the legislature to change the Constitution at his convenience, using press censorship, intimidating the population with a vast network of spies, and coordinating economic policy with the most powerful. The man was a pioneer. The political generations that followed produced variations of the same theme.

Not surprisingly, for a regime that produced vast social and economic inequalities and violently squelched popular attempts at meaningful political participation, the system generated a social explosion. The civil war that followed the collapse of the military-civilian alliance left 70,000 dead, displaced millions of people and planted the seeds of the intractable gang problem. After twelve years, the conflict ended with an agreement, the 1992 Peace Accords. They included, among its key elements, a return to civilian rule redefining the role of the armed forces as apolitical. The post war years may have been unsatisfactory in many ways, but the press has been free, Salvadorans have engaged in meaningful political participation, and the two main political parties—representing the warring factions during the civil war—have alternated in power, allowed free and fair elections, and generally respected the system of checks and balances.

And then, in the 2019 presidential election, the two historical political parties imploded. They had failed to deliver significant improvements in the lives of the majority of the population, they were massively corrupt, and, rather than dealing with the dangerous gangs that victimize the population, they tried to instrumentalize them for electoral purposes. The vacuum of power left by the feckless traditional parties has been filled by the coolest and handsomest man in the entire world.

On February 9, the convergence of the highly personal agenda of the president, the international permissiveness for norm-breaking, and the interests of the Army, created a wrecking-ball moment. Fortunately, it failed. His ironically named political party, Nuevas Ideas, is expected to obtain a substantial majority in the legislature in the 2021 elections, opening up countless opportunities for mischief. Unless Salvadoran civil society and the international community can stop him, Bukele may destroy the fragile institutions left by the Peace Accords. The rest is frightening and uncharted territory.

Héctor Lindo-Fuentes is Professor Emeritus of History at Fordham University.

Ruling on Bukele Reelection Prompts US Comparisons to Venezuela

On the Expulsion of Daniel Lizárraga